Compared to 2019, the proportion of first-time campers across the U.S. grew five-fold, while the number of households that own RVs grew by 2.6 million, according to the latest research from Kampgrounds of America’s annual North American Camping Report. COVID-19 proved a key driver behind the influx of many camping attributes, including the 10.1 million campers who camped for the first-time in 2020, of which one-third attributed trying camping due to the belief that it is a safe way to travel and desire to avoid crowds. More than 60% of these first-time campers plan to camp the same or more in the coming year; across all campers, families are the group most likely to spend more nights camping in 2021. 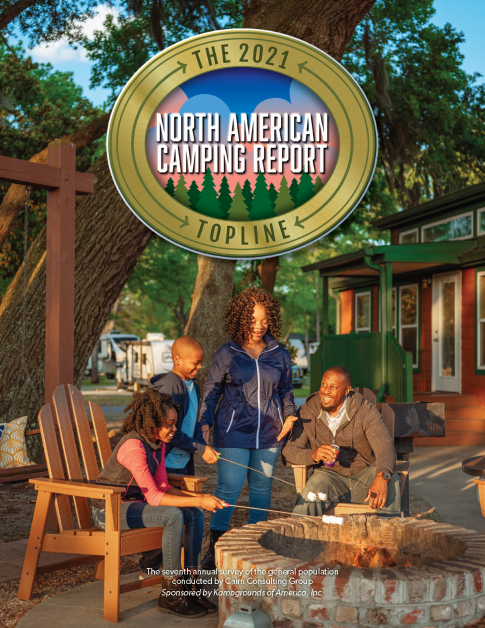 Camping had been steadily growing in popularity prior to the pandemic, but experienced aggressive growth across the U.S. last year. The 2021 North American Camping Report, which surveyed U.S. and Canadian campers’ sentiments and behaviors on the outdoor recreation in January 2021, shows that more than 86 million U.S. households consider themselves campers and 48 million of those households took at least one camping trip in 2020 – up more than 6 million over 2019.

Campers are also more diverse than ever as the incidence of camping among non-white and same-sex communities meets or exceeds national representation. Six-in-10 first-time campers in 2020 represent diverse ethnic groups, while 61% of same-sex families camp with children, an increase of 12 percentage points over 2019.

“More than 80% of campers changed their camping habits last year – including working and schooling from the campground, turning to RVs for travel safety and security, and adding more weekdays to their trips – which, coupled with the influx of first-time campers, solidifies that many Americans turned to camping and the outdoors to make it through a challenging year,” said Toby O’Rourke, President and CEO of Kampgrounds of America (KOA). “One of the most encouraging trends of this year’s data is the continued growth of diverse communities engaging in camping for the first time and becoming even more engaged, like Black campers having the highest intent of all camper sub-groups to purchase an RV this year.”

In addition to the spikes of first timers and the diversity of campers, 2020 saw an increase in activity around RVing as people turned to RVs to provide a safe, personal space while on-the-road and camping.

Data indicates a strong outlook for both RV and the camping industries, with more people identifying as RV campers, more people buying RVs and a very strong increase in interest year-over-year.

Additional key findings of the 2021 North American Camping Report include:

How COVID-19 Changed the Camping Experience

The Impact of COVID-19 on RVing

Join the KOA Family of Campgrounds

The results of the most recent iteration of the North American Camper Survey are based on a total of n=3,926 surveys completed among a random sample of U.S. (n=2,436) and Canadian (n=1,500) households. Within the U.S. sample of households, results are stratified by Census Region: Northeast (n=609); Midwest (n=608); South (n=610); and West (n=609). Overall, a sample of n=2,436 U.S. households is associated with a margin of error of +/- 1.99%, while a sample of n=1,500 Canadian households is associated with a margin of error of 2.53%. All surveys were completed online in January 2021 via an outbound solicitation sent to a randomly selected cross-section of U.S. and Canadian households. In order to calculate overall incidence, the sample of respondents was statistically balanced to ensure that the results are in line with overall population figures for age, gender, and ethnicity. Some results may not add to 100 percent due to rounding.