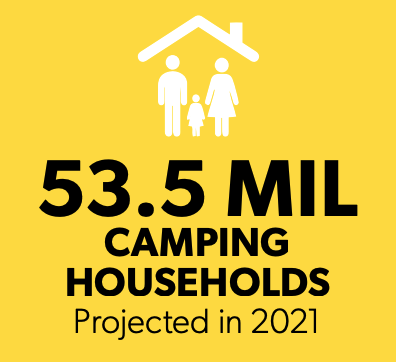 A busy month for the camping industry, data suggests that a staggering 24.5 million campers will venture out in July. The KOA July Monthly Research Report also notes impressive growth among new campers with the new camper segment estimated to reflect 4.9 million by the end of the year. This is up from estimates of 4.3 million in May and 4.8 million in June.

Looking to summer as a whole, KOA research shows that 52% of all North American campers plan to camp even as monthly research shows campers across the U.S. and Canada are dealing with outsides forces that may affect camping behavior.

“It’s very encouraging to see month-over-month growth in camping interest among veteran and new campers,” said Toby O’Rourke, president and CEO of KOA. “While we are still seeing outside factors, like COVID and now gas prices in the U.S., affect travel, camping is not only proving to be a top vacation option, but the preferred mode of travel for a growing segment of the population.”

The KOA July Monthly Research Report reveals that while COVID concerns continue to be the primary reason for changes to camping plans (40%), financial concerns and gas prices are also considerations. Nearly 7-in-10 campers say that climbing gas prices could affect their summer camping plans.

“As a business that is tied to road travel, we keep a close pulse on fuel prices,” O’Rourke said. “We have seen exponential growth in camping households across the U.S. and throughout our organization. In fact, the dramatic year-over-year growth KOA experienced for ten years after the 2008 recession began as prices at the gas pump started to rise, indicating resiliency among our camping base. People may be taking trips closer to home or staying at locations longer, but we are not seeing a slowing in the desire to camp.”

Continuing trends established in prior months, campers are most likely to spend their trips at state park (76%), national park (74%), and privately owned campgrounds (61%) this summer. Top states for summer camping include California, New York, Florida, and Pennsylvania.

Other key camping industry indicators tracked by KOA include participation, incidence and future intent, and preferred type of camping.

Kampgrounds of America, Inc. (KOA) is the world’s largest system of open-to-the-public campgrounds with 500+ locations across the U.S. and Canada united under the mission of “connecting people to the outdoors and each other.” The industry leader in outdoor hospitality, KOA’s family of campground brands – KOA Journey, KOA Holiday and KOA Resort – offer sites and amenities designed for every type of camping experience. In addition to unrivaled brand visibility, KOA offers campground owners unparalleled support, marketing, and technology. The company’s proprietary reservation software, K2, deliver’s campgrounds a completive advantage within the market.