A surge in short-term business in the first quarter of the year resulted in an increase of total revenue of 20.9% versus 2020 and 21.3% over a record 2019, according to Kampgrounds of America, Inc. in their recently released Q1 Business Report. The company also acquired four campgrounds and secured five franchise contracts during the same period. Additionally, KOA reports a positive outlook for the rest of the year, sharing that advanced deposits on future business at the end of the quarter were up over 55% from their record-breaking 2019.

KOA reports a 42.6% increase in short-term, first-quarter revenue over 2020 and a 39.6% increase over a record 2019. This dramatic growth follows one of KOA’s most successful fall seasons and points to continued momentum for the company.

Across short-term business, which measures vacation and leisure camping, KOA has experienced growth in nearly every measure. Occupancy in the first quarter of 2021 was 24.3% improved over 2020 and 17.5% over 2019. 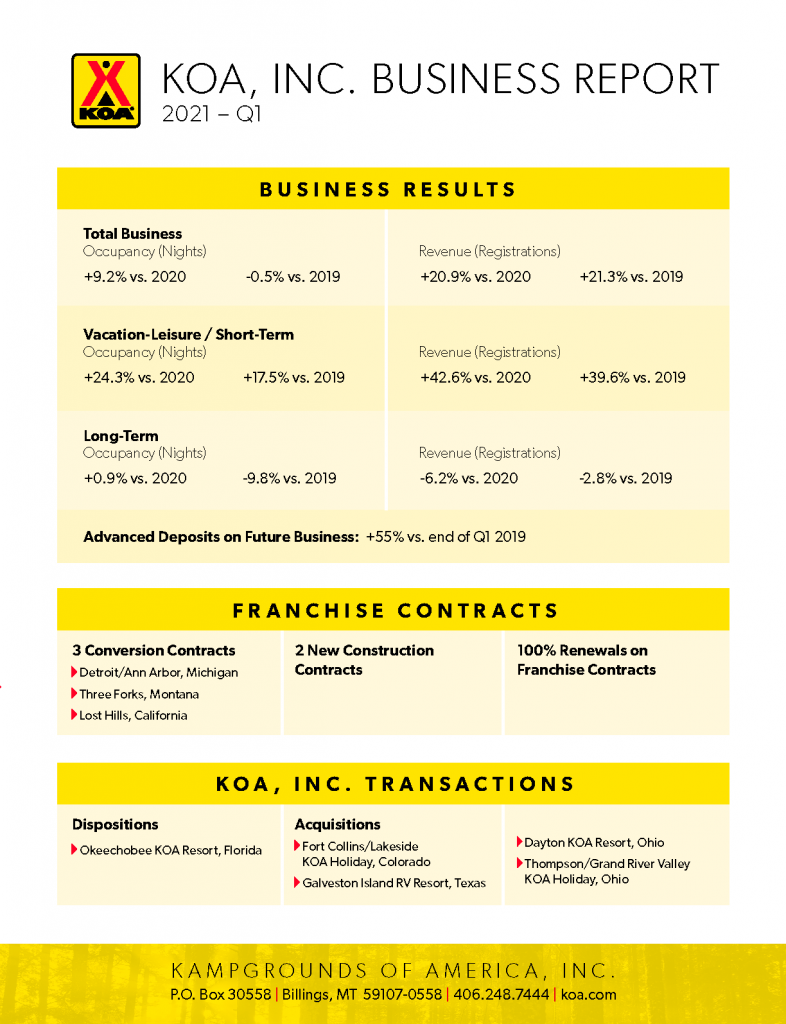 “Since 2020 was affected by various challenges related to COVID-19, we’ve begun benchmarking our business against 2019,” said Toby O’Rourke, president and CEO of KOA. “We experienced the best year in our history in 2019 and it was our tenth straight year of growth following the recession. Prior to the onset of COVID-19 disruptions in March last year, we were on pace to exceed 2019 by 10%. Seeing KOA perform even stronger in the first quarter of this year is incredibly encouraging.”

“We do feel the continued impact of COVID-19 when we examine our long-term business.” O’Rourke said. “Ongoing research we are conducting shows us that 57% of campers say availability of vaccines has a great deal or some impact on their camping decisions. The effect is even more pronounced on older demographics who are more likely to participate in long-term and snowbird RVing.”

According to research conducted in April, KOA found that 3-in-10 campers are either waiting to be vaccinated prior to camping or waiting for more people to be vaccinated. With a growing number of American’s receiving vaccinations, the outlook for camping in 2021 is strong.

“The interest in building campgrounds from the ground up is really motivating,” said O’Rourke. “Developers are seeing the value and potential camping has for serious returns on their investment. We also see that value here at KOA and work closely with these new parks to ensure they maximize their potential.”

An indication of franchisee satisfaction, KOA also had 100% renewal rate on existing franchise contracts in this time period.

KOA isn’t just seeing growth from the franchise business, but is also actively expanding their owned campground portfolio. In the first-quarter of the year, KOA acquired four new campgrounds. Three of these acquisitions were previously franchised KOA locations, the Fort Collins/Lakeside KOA Holiday in Colorado and the Dayton KOA Resort and Thompson/Grand River Valley KOA Holiday in Ohio. The company also added an independent park to the system through the purchase of the Galveston Island RV Resort in Texas.

According to O’Rourke, “KOA sees value in franchising campgrounds and owning them ourselves. This mindset is not only financially driven, as campgrounds are an increasingly lucrative business, but it also makes us better franchisors because we live, breathe and understand camping from top to bottom. The camping industry is growing and our brand is well positioned to be at the forefront through both the owned and franchised sides of our business.”

For more information on how to be part of this exciting growth, contact KOA.