Cementing the best year in 60 years of company history, Kampgrounds of America, Inc. (KOA) reports a 33.2% revenue increase over 2020 and a 33% increase in revenue over 2019, the company’s previous highest-grossing year, in their Q4 Business Report. Advanced deposits on future business are up 51% over the previous year, indicating this astounding growth will continue into 2022. Additionally, KOA continues its expansion in franchise contracts and its company-owned portfolio, adding thirteen new campgrounds, thirteen new construction contracts and fifteen owned locations in 2021.

Impressive Performance Reported Across All Segments 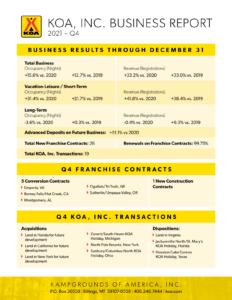 While slightly down compared to 2020, KOA shares increases from 2019 across their long-term business. End-of-year reporting indicates that long-term registration revenue was up 9.3%.

“We are excited to close 2021 and go into our 60th year in business with our strongest financial performance ever, and even more pleased with the indicators of future growth,” said Toby O’Rourke, president and CEO of KOA. “The pandemic served as a catalyst for many people to try camping for the first time, and with a 51.1% increase in advanced deposits, that isn’t slowing down. People are choosing to camp over other travel options and they are choosing to camp at KOAs.”

Continued Growth of the Franchise System

Pointing to continued strength of the KOA brand and services, the company’s system of franchised campgrounds continued its growth in 2021. The Q4 Business Report highlights end-of-year totals of 26 new franchise locations across the KOA system. Thirteen of the locations added in 2021 are new construction contracts, indicating demand for more camping inventory.

“We are very encouraged that so many campgrounds see the value in partnering with KOA,” said Ann Emerson, chief operating officer of KOA franchise. “Both longstanding campgrounds and new players starting from the ground up know that KOA can help them deliver a top-of-the-line experience that is trusted among campers and travelers. We are well poised to continue leading the camping market.”

An indication of franchisee satisfaction, KOA also reports a 99% renewal rate on existing franchise contracts in 2021.Expansion of the Corporate Portfolio

In addition to growth in its franchise business, KOA continues to expand its owned campground portfolio. In 2021 KOA added 15 new campground locations or land for future development. In addition, KOA reports four dispositions.

In the fourth quarter of the year, KOA acquired three new campgrounds and purchased land in Florida, California and New York for future development. The three campgrounds added to the portfolio were Covert/South Haven KOA Holiday in Michigan, Sunbury/Columbus North KOA Holiday in Ohio and North Pole Resorts in New York.

“KOA has a continued interest in adding additional owned properties to the KOA brand,” said Darin Uselman, chief operating officer of owned and operated assets of KOA (OAK). “There is a financial component to building our owned portfolio, but it also improves our work as franchisors as we intimately understand camping operations and campground ownership.”

ABOUT KAMPGROUNDS OF AMERICA

Kampgrounds of America, Inc. (KOA) is the world’s largest system of open-to-the-public campgrounds with 500+ locations across the U.S. and Canada united under the mission of “connecting people to the outdoors and each other.” The industry leader in outdoor hospitality, KOA’s family of campground brands – KOA Journey, KOA Holiday and KOA Resort – offer sites and amenities designed for every type of camping experience. In addition to unrivaled brand visibility, KOA offers campground owners unparalleled support, marketing, and technology. The company’s proprietary reservation software, K2, delivers campgrounds a completive advantage within the market. Founded in 1962 in Billings, Mont., KOA now serves more than a million camping families each year, who rely on the standards of excellence and unique outdoor adventures for which KOA is known. For more information, visit KOA.com.